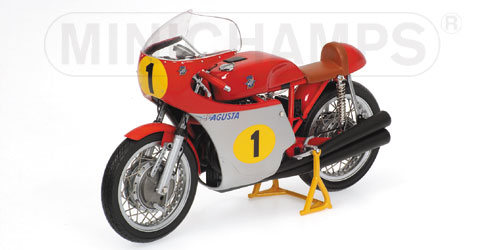 Minichamps (GERMANY) models are the world renowned classic motorcycle models.
These 1:12 fully die cast models are of exceptional quality and detail with many working parts.

MV Agusta 500cc AGOSTINI 1970
It is very seldom, that a motor bike brand and a racing driver are in such a close relationship as the MV Agusta and Giacomo Agostini. As a reaction to the Honda factory bikes, which dominated the racing scene in the early 60s, in 1964 Conte Domenico Agusta ordered the development of a three-cylinder racing bike. The result was a bike, which was smaller and lighter than the counterparts constructed by the competitors. It had a comparable performance, but offered much better handling. Conte Domenico Agusta allowed the use of this bike under one condition: An Italian had to be the driver. So, Giacomo Agonstini`s triumphal procession started and the name Agusta became a legend. In total, Agostini won 15 World Championships, 7 of them in the 500 cc class on a three-cylinder four-stroke MV Augusta. He also succeeded in 1970, when he rode a factory bike. The 500 cc was equipped with a seven-speed gearbox and the output of 78hp at 12000 rpm allowed a top speed of 260 km/h. The 3-cylinder engine`s bore and stroke of 62 x 55 millimetres resulted in a cubic capacity of 498 cm³. The successful 500 three-cylinder was produced between 1967 and 1972.